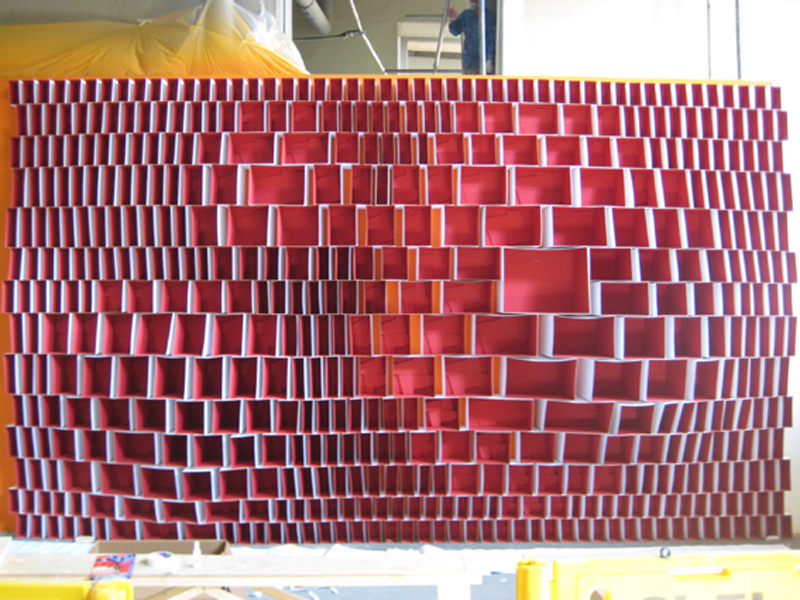 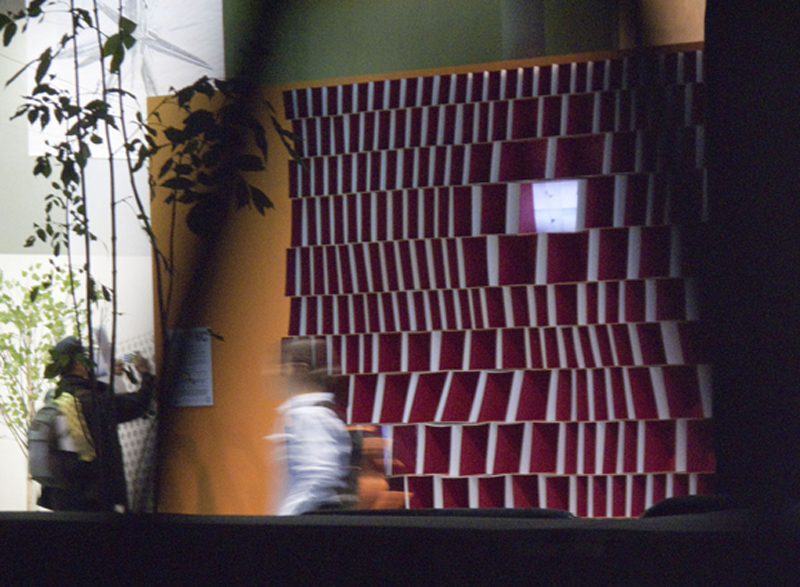 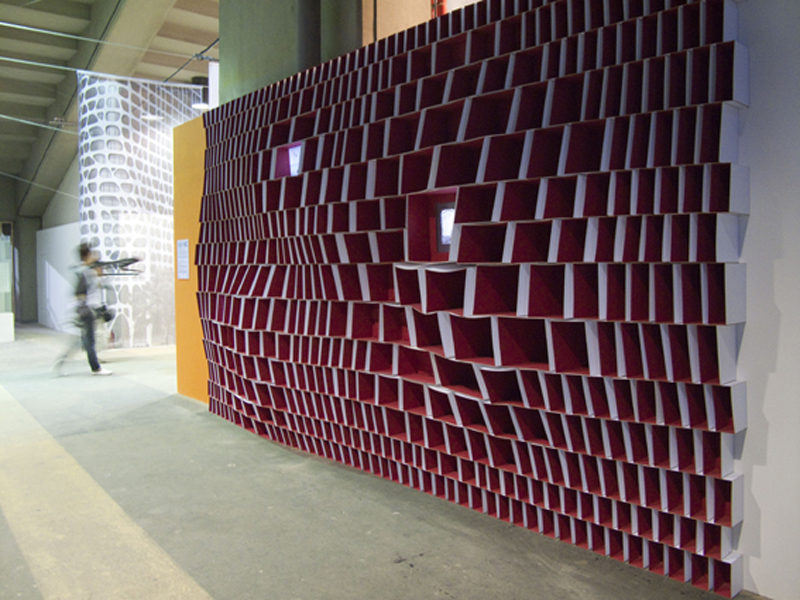 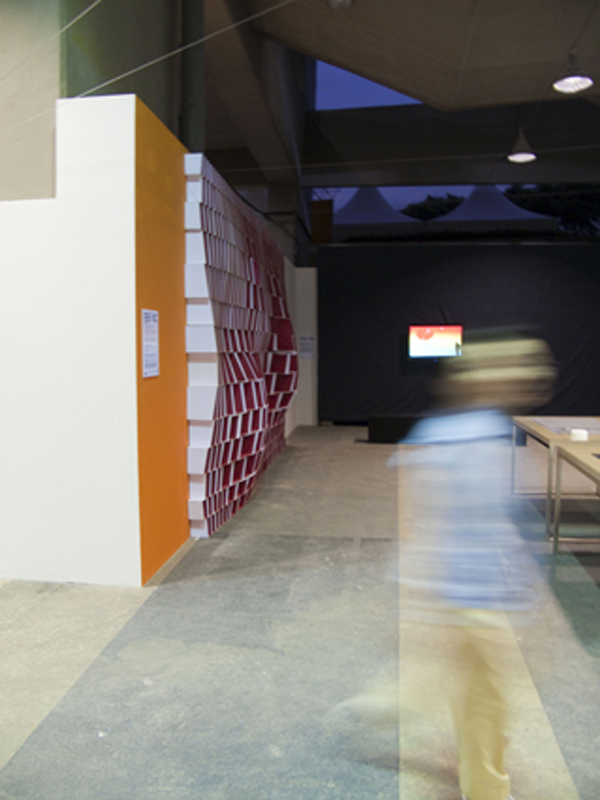 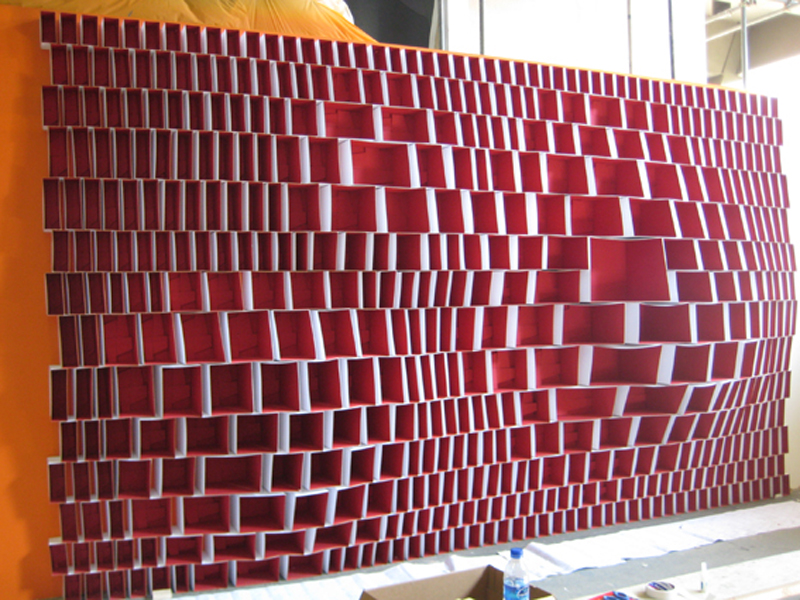 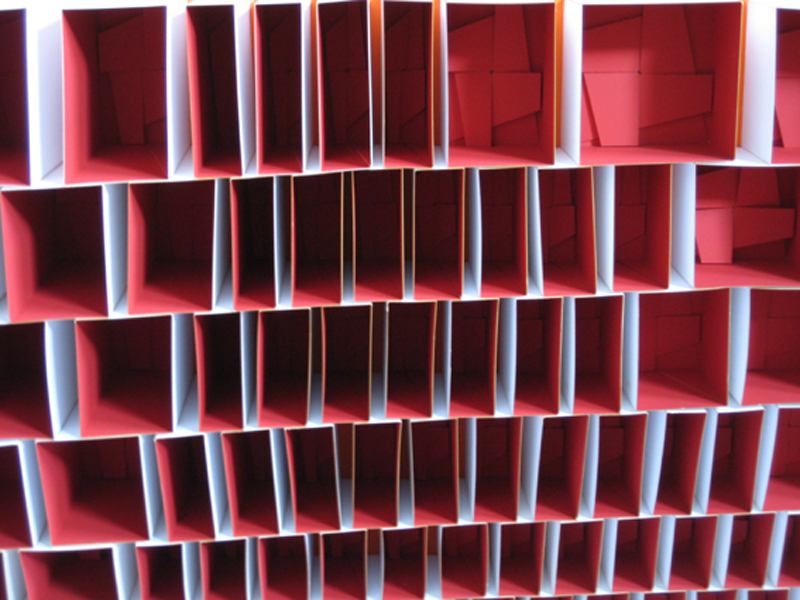 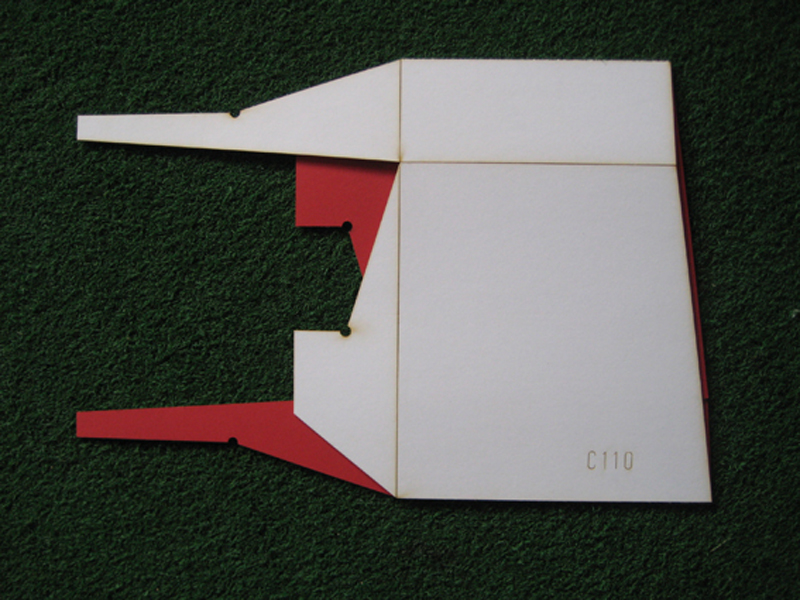 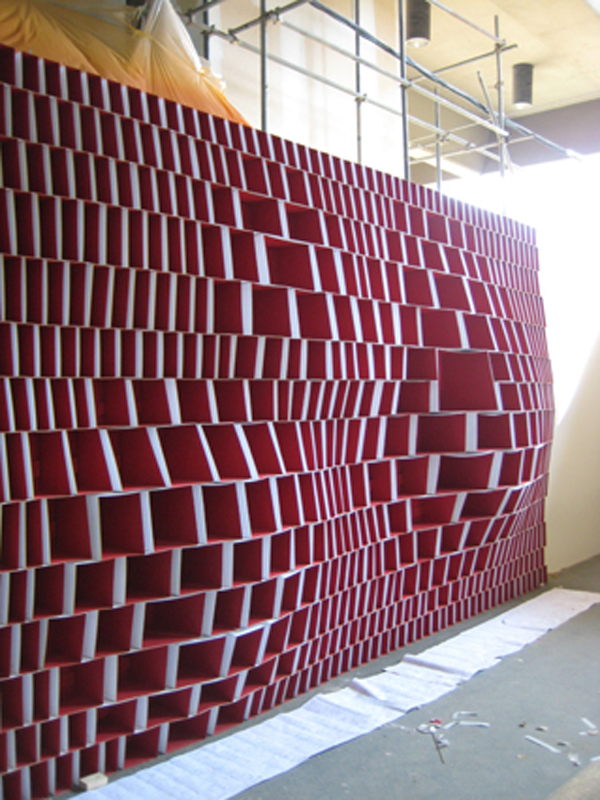 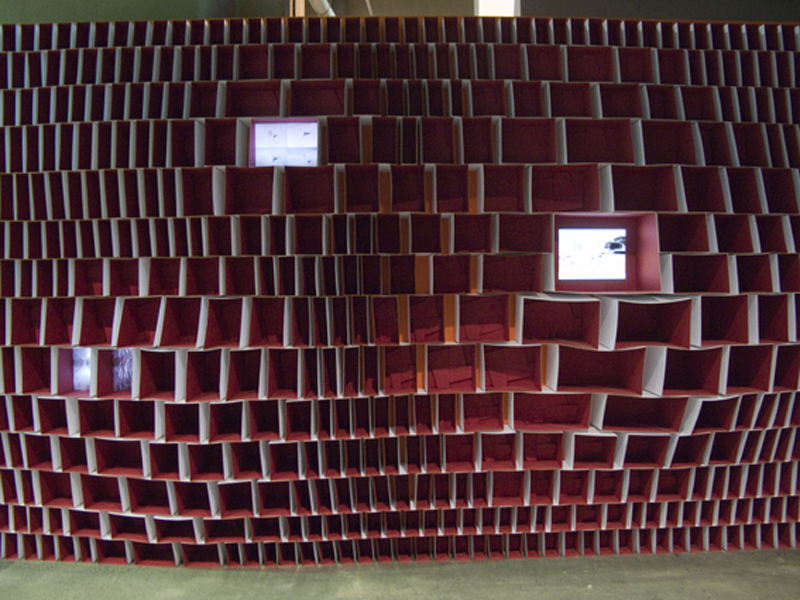 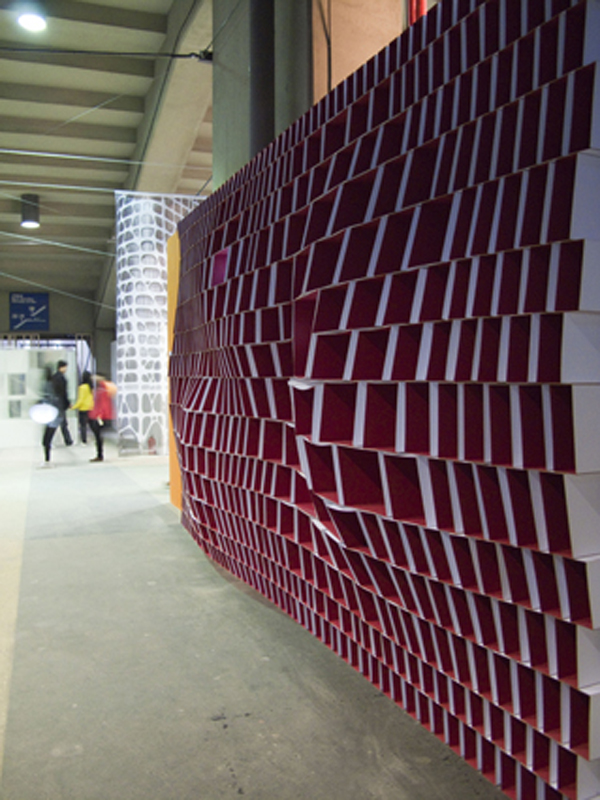 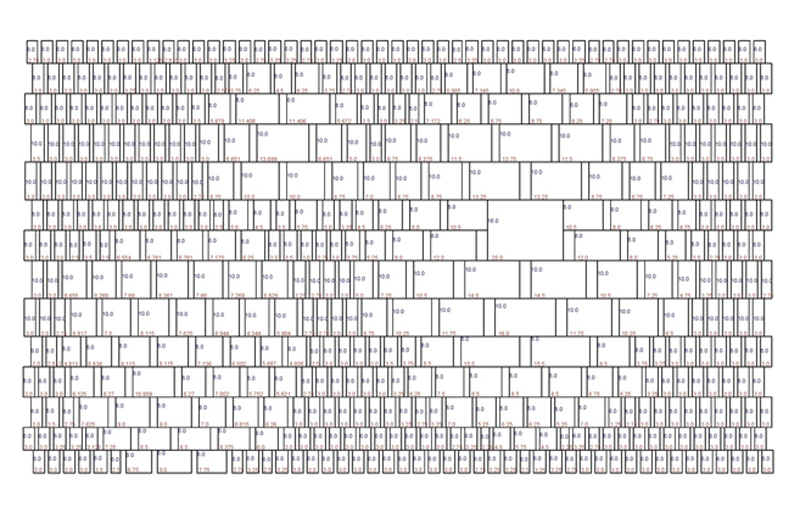 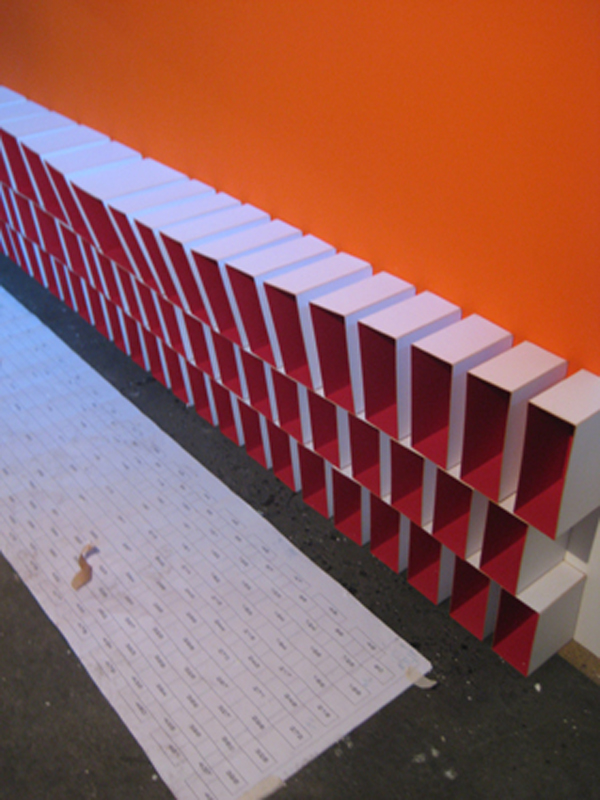 Random-Access Memory Wall proposes both a critique and a hopeful view of our contemporary culture, where excessive material accumulation has accelerated at an alarming rate. This overload manifests itself in physical accumulation as well as informational oversaturation. “If space-junk is the human debris that litters the universe, junk-space is the residue mankind leaves on the planet. The built product of modernization is not modern architecture but junkspace” (Rem Koolhaas “JunkSpace”).

This installation takes Koolhaas’ critique of almost a decade earlier on a different trajectory. A large percentage of our built environment is dedicated to managing, reorganizing and reutilizing material resources. At the same time, we are also coping with the urge to accumulate “stuff,” both physical and informational. We can hardly keep track of the piles of our essential “collectables” and “memorabilia” on a daily basis. RAM Wall proposes a system of storing/archiving information, suggestive in its capacity for providing both physical and digital storage. It attempts to propose a system that is capable of reorganizing, reshuffling, and/or retelling information. “Patterns imply repetition or ultimately decipherable rules: Junkspace is beyond geometry, beyond pattern. Because it cannot be grasped. Junkspace cannot be remembered. It is flamboyant yet unmemorable, like a screen saver, its refusal to freeze insuring instant amnesia….” Rem Koolhaas, “JunkSpace” As opposed to “JunkSpace,” this installation offers an alternative view of our overabundant material culture by exploring the logic of simple and familiar use of conventional material. In doing so, we create “Patterns (that) imply repetition or ultimately decipherable rules” and ensure that the material information “be remembered.” A utilitarian and basic folding unit that resembles a standard manufactured cardboard box accretes like masonry wall, yet variations are given to the depth and spacing of individual modules by means of mass customization.